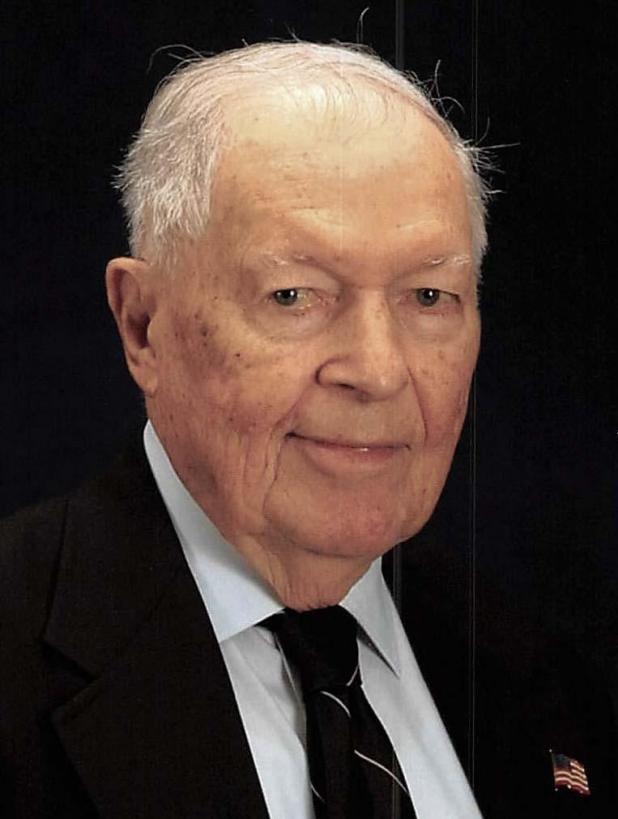 Breaux Bridge – A Mass of Christian Burial was celebrated at 11 a.m. on Tuesday, December 22, 2020, at St. Bernard Catholic Church for Vance Jasper Theriot, 98, who passed away on Thursday, December 17, 2020, at Ochsner St. Martin Hospital.
Fr. Garrett McIntyre officiated at the Funeral Mass. Scriptures were read by Caroline Mitchell, his great-niece. Gift Bearers were great-nieces Ashley, Victoria, Kathryn and Elizabeth.
Interment followed at St. Bernard Cemetery No. 1 in Breaux Bridge.
Vance is survived by his sister, Lois Theriot Laville of Breaux Bridge; his nephew Dr. Robert Laville Jr; his nieces, Dr. Mary Laville and Marie “LeeLee” Laville; and his great-nieces, Ashley Laville LeBlanc, Victoria Laville, Kathryn Mitchell, Elizabeth Mitchell and Caroline Mitchell. He is also survived by his special companion, Dorothy “Dot” Breaux.
He was preceded in death by his wife, Gloria Royer Theriot; his father, Valsin J. Theriot, and his mother, Celine Hanes Theriot.
Vance was born and raised in his beloved town of Breaux Bridge. Although soft-spoken and having a quiet manner, he was gifted with many accomplishments. He was the perfect Southern gentleman. Vance was endeared and proud of his Catholic faith, his family, and his military service.
Vance graduated from Breaux Bridge High School. He attended SLI for three years, majoring in electrical engineering. He then had a yearning to join the military at age 19. He served in World War II in the 20th Air Force as a radio mechanic in the Pacific Theater of Operations. While stationed on the island of Saipan, he witnessed the USS Indianapolis sailing nearby carrying components of the atomic bomb used in the bombing of Hiroshima, Japan.
For his military efforts, he was awarded the American Theater Campaign Medal, the Asiatic-Pacific Campaign Medal with a bronze star, the Good Conduct Medal, and the World War II Victory Medal. He was honorably discharged in 1946 with the rank of sergeant.
When Vance returned to the States in 1946, he went into the clothing and home furnishing retail business with his father, V.J. Theriot. Eventually, he became owner and manager of V.J. Theriot and Son store for many years.
In 1949, Vance met his future wife, Gloria Royer Theriot, at a Mardi Gras ball. Gloria worked with him in the family store. They were married for 57 years until Gloria’s death in 2007.
Vance was active in community service with involvement in youth and veteran affairs. He served as an advisor to draft registrants in 1948 and worked as St. Martin Parish Chairman of the U.S. Savings Bond Committee. He served as a local scoutmaster. He was a member of American Legion Post 133 where he served as Commander and was a member of VFW Post 4215 where he served as Chaplain.
In 1965, Vance became interested in politics – a career that spawned 21½ years. He was elected to the office of City Councilman, a position he held for 12 years; for the last six years, he served as Mayor Pro Tem. In 1977, he became the 26th Mayor of Breaux Bridge – a term that lasted 9½ years. His proudest achievements as mayor were overseeing the construction and completion of the new City Hall and improving drainage of the city.
Always interested in helping with the progress and success of Breaux Bridge, Vance joined the Board of Farmers-Merchants Bank in 1964. He stayed on the Board for 55 years until 2019 whereby he saw the development of the bank grow from its small hometown roots to a multicentered facility. He has always treasured and was proud of his endeared friendships with his fellow Board members.
Pallbearers were Farmer-Merchants Bank Board members, Allan Durand and Johnny Girard; Dr. Robert Laville Jr., Dr. Matthew Mitchell, Ryan LeBlanc and Donald LeVasseur. Honorary pallbearers were the remaining members of the bank’s Board.
Vance’s family wishes to thank his “Angels” that took care of him: Danielle Harding, Brunella Morgan, Lisa Foster, Angela Williams, Jounneil Nicholas and Elaine Mayes.
The family wishes to also thank Dr. Warren Degatur for all his years of medical expertise and friendship bestowed upon Vance.
In lieu of flowers, donations may be made to St. Bernard Church, the Carmelite Monastery, or the charity of your choice.
Pellerin Funeral Home was in charge of arrangements.
(Pd.Adv.)