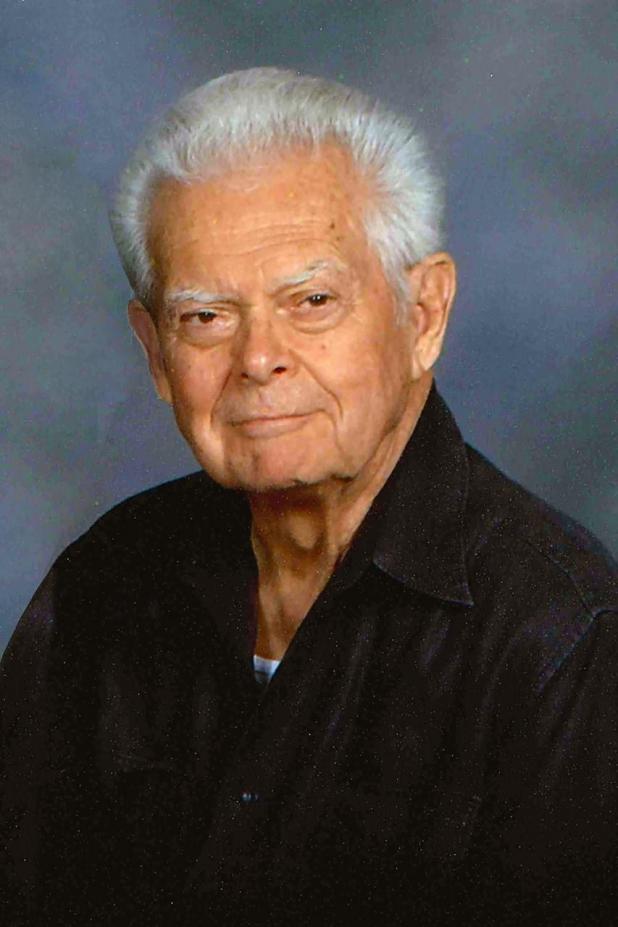 Breaux Bridge – A Memorial Mass will be held at 11 a.m. on Saturday, January 11, 2020, at St. Bernard Catholic Church for Joseph Bertrand Colligan Jr., 96, who passed away peacefully on Tuesday, December 24, 2019, at his home surrounded by his family.
The family requests that visiting hours be observed at the funeral home from 8 a.m. until 10:30 a.m. on Saturday. A rosary will be prayed at 9:30 a.m. on Saturday.
Rev. Stephen Pellessier will officiate at the Memorial Mass. Interment will follow at St. Bernard Cemetery No. 1 in Breaux Bridge.
Joe was born in Sulphur, Louisiana on August 13, 1923, and as a baby, moved back to the family farm in Church Point, Louisiana. He was the eldest of seven children. He graduated from Church Point High School in 1940.
Prior to WWII, “Junior” joined the Navy in 1941 and proudly sailed on the USS Ranger, during “Operation Torch.” He was then stationed in Dallas, Texas and Athens, Georgia, for pilot training. He later served in the Pacific and was based in the Philippines.
After being honorably discharged from the Navy on December 5, 1945, Joe attended SLI (ULL) on the GI Bill and graduated in 1951, in Agricultural Science. During his senior year, he met the love of his life, Genevieve Angelle. They were married on September 28, 1952. After their wedding, Joe worked as a State Sanitarian inspector.
In 1957, he went to work for Dresser Magcobar as a sales and service engineer for 25 years. During that time, he also raised cattle on the Angelle Farm. After retiring from the oil industry, Joe continued working as a consultant and as a real estate broker. He and Genevieve owned and operated J&G Realty. Together they developed the subdivision where they built their home on Spanish Moss Lane.
Joe and Genevieve raised four daughters and have seven grandchildren and two great-granddaughters. He was also Uncle Joe to 54 Colligan and Angelle nieces and nephews.
Joe enjoyed spending time with his family, traveling, flying and camping. His grandchildren lovingly referred to him as Papa Joe. Joe and Genevieve were long-time residents of Breaux Bridge from 1962 to 2018.
He is survived by his loving spouse of 67 years, Genevieve Angelle Colligan; daughters, Jeanne Colligan Juneau (Mark, Jr.), Colleen Angela Colligan, Deborah Colligan Saxton (Rudy), and Jennifer Colligan Gossen (Philip); grandchildren, Michelle Juneau Willis (Robert), Marci Louise Juneau, Angelle Juneau Scardino (Jeffrey), Zachary Joseph Saxton (Harrison Logan), Alexandra Leigh Saxton, Andrew Philip Gossen (Barrett Christine), and Julia Gossen Landry (Jackson); great-grandchildren, Genevieve Renee Scardino and Vivian Marie Landry; brother, James Cecil Colligan (Barbara); sisters, Josephine Colligan, Norma Colligan Goff, Theresa Colligan Michels (Richard), and Carol Ann Colligan Potier (Troy).
He was preceded in death by his father, Joseph Bertrand Colligan Sr.; mother, Louisiana Higginbotham Colligan; and his brother, James (Jimmy) Harry Colligan.
The family sends its deepest appreciation to “Mr. Joe’s” amazing caregivers – Tina (our guardian angel), Kierra, Dorian, Nicole, and Irene. The family would also like to thank Hospice of Acadiana for their exceptional care, especially Joanne (his nurse), Vivian, Carol and Latoya.
In lieu of flowers, please send donations either to The Friends of WWII Memorial (WWIImemorialfriends.org) 202-675-2017 or Alzheimer’s Association.
Pellerin Funeral Home of Breaux Bridge (337-332-2111) is in charge of arrangements.
To view on-line obituary, sign guestbook and view video tribute, go to www.pellerinfuneralhome.com.