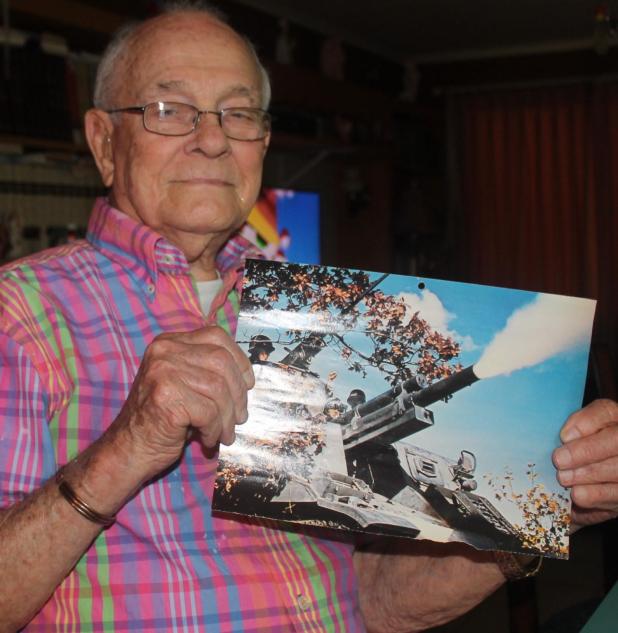 WWII VETERAN Sidney Vincent of St. Martinville holds a picture of a 105-mm howitzer similar to the one he manned as a member of Battery A, 310th Field Artillery Battalion, 79th Infantry Division, that landed at Utah Beach in June 1944.
(Henri C. Bienvenu) 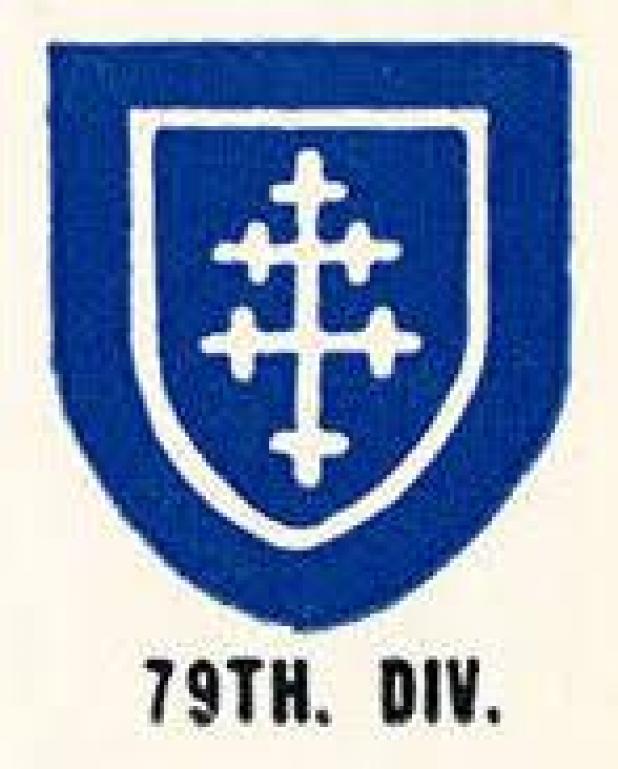 Tomorrow, June 6, marks the 75th anniversary of D-Day in World War II, when Allied Forces launched Operation Overlord, sending troops onto five critical landing zones along the English Channel’s French coast.
American units were assigned two of the five beaches targeted in the 1944 invasion – Omaha and Utah on the western flank of the landing area.

Sidney Vincent of St. Martinville was in the second wave of American forces that landed at Utah.
He was the youngest of three Vincent brothers who served in WWII. His oldest sibling, Aldon, was in the Army Air Force, working as an aircraft mechanic, while Russell ended up as a gunner on a B-17 bomber, spending most of the war flying missions out of Italy.
Sidney recalls that he knew Russel was on the draft list and went to the courthouse to sign up. Only 18, “I didn’t tell my parents,” he says, “but I felt I needed to do my part.”
He and Russel were inducted together at Camp Beauregard in July 1943 and Sidney was assigned to the artillery branch of the Army, undergoing training at Fort Sill, Okla., on 105 mm howitzers.
He was eventually assigned to Battery A, 310th Field Artillery, with the 79th Infantry Division.
The division reached England in February 1944 to begin intensive training for the invasion, although Sidney says the GI’s didn’t know much about the “big picture.”
The famed 4th Infantry (Ivy) Division spearheaded the Utah landing, and on D-Day the beach saw more than 23,000 soldiers and 1,700 vehicles come ashore. D-Day casualties included 197 killed in action and 60 missing.
The German resistance at Utah was not as fierce as at Omaha, and the landing was considered the most successful of the five Allied beaches.

Although Sidney was not in the first wave of the invasion on June 6, his artillery unit joined the battle eight days later.
Vincent, who will turn 95 next month, earlier this week recalled his first day in France.
“We were scared,” he says. “But after a few days, we fell into the routine and got used to (the sounds, sights and smells of battle).”
His unit set up its first position in an apple orchard and settled into slit trenches. “A sniper wounded four of our guys on that first day,” he says.
As the campaign advanced, the 310th was attached in support of several different divisions, taking part in the capture of the key port of Cherbourg north of Utah Beach, and then in the breakthrough battle (Operation Cobra) of St. Lo, located at a crucial crossroads south of the beachhead in the final week of July.
Vincent recalls the advance across the French countryside and through numerous villages. “The French residents were so happy to see us,” he says, “they kept passing us bottles of wine as we drove through.”
His unit eventually got within 14 miles of Paris but veered east towards Germany before reaching the French capital.

American artillery provided crucial fire support for infantry and armored units during the fighting, and Vincent laughs as he recalls infantrymen slogging past the 310th howitzers and kissing the big cannons in appreciation.
“We eventually reached the Rhine River,” he says. “We had to cross the river on a pontoon bridge that was still under rifle fire and strafing by German fighters.”
V-E (Victory in Europe) Day (May 7)came soon after his unit moved into Germany and was not involved in any major action on German soil.
The 310th Artillery was awarded the distinguished Presidential Unit Citation for its action in the defense of Rittershoffen and Hatten in the Alsace region of northeastern France near the Rhine during two weeks of intense fighting in January 1945.

Just as vivid as his combat memories is Sidney’s trip back across the Atlantic in a “Victory” class transport ship. “We went through a terrible storm,” he says and finally sailed into New York City harbor 21 days after leaving France.
He was discharged from the Army at Camp Shelby, Miss. in July 1946. He returned to St. Martinville, married the former Margaret Thibodeaux and settled into a career with the U.S. Postal Service.