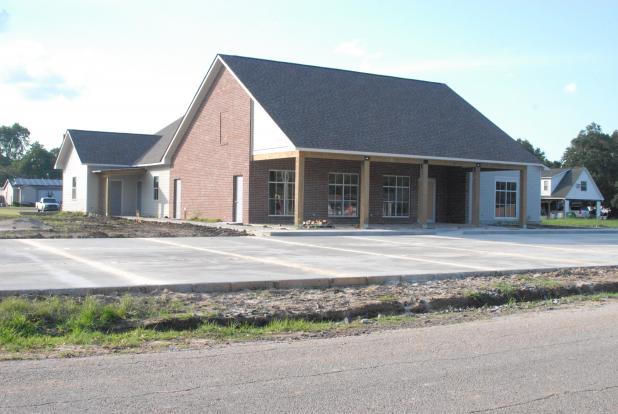 NEARLY DONE – Completion of the Village of Parks’ new $975,000 city hall building is expected by mid-July. It is located at the cormer of Periou and Melancon Streets, adjacent to Cecile Rousseau Poche Memorial Park. (Karl Jeter)

Village responds to noise in park

Following a series of complaints about noisy events at Cecile Rousseau Poche Memorial Park, the village is considering taking steps to deal with the situation.
In order to limit the volume of music at public events like the annual Cracklin’ Cook-Off, as well as private parties, Mayor Kevin Kately said it might be necessary to find some kind of compromise.
“I live near the park, and I knew when I moved there that there would be noise sometimes,” he said. “But I never really understood the need to turn the volume up until people can’t even talk to each other.”
Kately suggested that extremely loud bass is the sound that carries the farthest. “I think that, if we talk to the people handling the sound, we can get the bass levels reduced a little without doing any harm to these events, and it might help the noise situation,” he suggested.

City Hall Progress
The long-awaited move into the village’s new city hall building could happen as soon as mid-July if all goes well, Kately reported.
The concrete parking lot and driveway were poured last week and Kately said the air conditioning system will be installed soon. After that, the unit has to run for about two weeks to dry the interior of the building before the floor coverings can be installed.

Basketball Court
The council discussed a planned renovation of the existing basetball court at the park.
The work will include a complete resurfacing of the court and painting the regulation lines, at an estimated cost of $10,000. New commercial goals would add from $10,000 to $20,000 to the project.
The mayor said he was surprised at the cost of the goals and will explore the option of having heavy steel stands made by a local metalworking shop, which would hopefully be much cheaper.

World Music Day Council member Myra Yvonne Narcisse reminded attendees that the Cecilia Cultural District-sponsored parishwide Fete de la Music is this Friday, June 21. The free-style World Music Day event will be held at various locations around the parish, including in front yards and porches of anybody who would like to participate.
The event mirrors an
annual French celebration of the summer solstice. It is held on the same day in 1,000 cities in 120 countries.