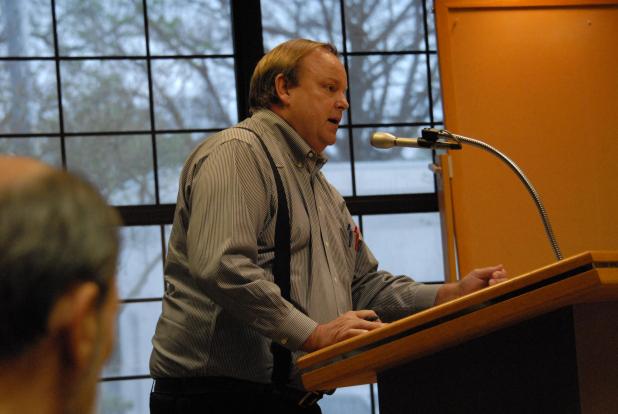 SM Special meeting – Public Works Superintendent Charlie Rader gives his account of an incident with an employee that occurred at the city barn on Feb. 26. Attorney William L. Goode looks on. (Karl Jeter)

At a special council meeting on Monday called following a heated argument between Public Works supervisor Charlie Rader and employee Michael Martin, the council called for polygraph testing of the principals and two witnesses.
The incident occurred on Feb. 26 when Rader confronted Martin about his overtime hours, which Rader considered excessive. Accounts of the men’s conduct during the dispute differ.
According to Martin, Rader ordered him to leave the premises, then grabbed his arm and escorted him from the building while using racial epithets, saying “Go ahead and hit me N....”
One of the police officers present at the meeting said more than one witness said that account was correct. Rader had called Mayor Melinda Mitchell who arrived at the Public Works barn minutes later followed by three police officers. Martin was driving to city hall, but saw Mitchell and returned to the barn.
Rader, who is represented by attorney William L. Goode, said he never used racial slurs, and in fact, Martin had said to him, “You f... n..., I’m going to beat your a...”
Complicating the story was a statement from local businessman Mark Brignac that he had uncovered a plot by employees to get Rader fired. He said he conveyed the information to the mayor the day before the incident with Martin, which Mitchell confirmed.
Councilman Craig Prosper, who had supported Rader’s hiring back in January, has expressed concerns with the director’s performance since then. Prosper complained that Rader was not spending enough time at the city barn learning operations, an issue that Rader refuted.
Councilman Juma Johnson was absent, so a 2-2 split vote on a motion by Dist. 2 councilman Mike Fuselier ordering Rader, Martin and the two witnesses – David deLaunay and Raphael Hebert – to take polygraph tests was decided by Mitchell. The mayor will request the testing by the Louisiana State Police or the Iberia Sheriff’s Department.
Martin said he is not willing to take a polygraph. “I’m not taking nothing.” he said, “If they can’t take my word for it like they don’t believe me, the best thing for me is to move on. There are plenty of jobs out there.”
A motion by Prosper to suspend Rader and Martin for two days without pay was approved over the objection of councilman Mike Fuselier.
Rader, who was accompanied at the meeting by attorney William Goode, has said he is considering legal action “to protect my reputation.”

Handcuffed
Not on the agenda was Rader’s complaint concerning the conduct of the police following the incident. He had secured a written statement from deLaunay but refused to turn it over when confronted by officers in his City Hall office. As a result, he was briefly handcuffed until he gave them the statement.
Chief Ricky Martin told the Teche News that an outside investigation into the actions of the officers concluded that they acted properly in the incident.