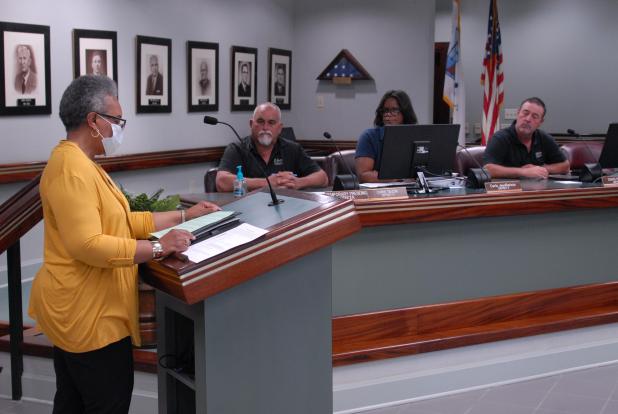 With just less than half of the 7.65-mill ad velorum property tax for the St. Martin Parish Library system expiring this year, a new proposal being considered by the St. Martin Parish Council would divert the expiring 3.65-mill portion to other specific needs.
In a special meeting held during the scheduled parish council committee meetings on May 19, a majority of the council approved a proposal to include the change in the millage renewal to appear on the Nov. 3 presidential election ballot.
Parish President Cedars took pains to make it clear that the proposal should not be interpreted as a criticism of the Library Board or system director Charlar Brew.
“I can’t tell you how much respect I have for the library board and its chairperson,” he said. “We have an excellent and constructive relationship and this action is not to be interpreted as resulting from any shortcoming on their part.”
But reduced income due to COVID as well as lower oil revenues, combined with rising costs of unfunded state mandates have put a strain on parish finances. This proposal, Cedars said, could go a long way toward providing a remedy without any increase in total taxes.
The proposed ballot measure, Cedars explained, would dedicate the diverted millage to three specific financing needs: building and facility maintenance, the Council on Aging, and district attorney/district court system funding.
•The parish owns 43 buildings, Cedars pointed out. Maintenance of those buildings as well as other parish facilities has gone nowhere but up, but there has not been an increase in funding for that maintenance in many years.
•Council on Aging Board Chairman Burton Dupuis explained at a parish meeting earlier this year that the COA audit report found a shortfall of more than $45,000 for 2019, even as Lower St. Martin Parish remains unserved by meal deliveries and most other services.
A millage proposal for COA support failed in 2017, but that was in a special election in which the turnout was just 10 percent. The proposed inclusion of COA support as a part of a larger issue, and included in a presidential election ballot, would provide a better measure of popular support, Cedars maintains.
The millage rededication would provide reliable, ongoing funding to address the shortfall and, possibly, allow expansion into all parts of the parish. Currently, the parish provides funding for the council’s transportation program and makes a voluntary annual contribution to the COA’s general fund.
•As for DA and district court funding, Cedars said that, while those agencies were once self-funded through fees, fines and penalties, that income stream ceased to be sufficient in 2015, and the courts are not likely to be able to self-fund again.
Parishes served by the 16th Judicial District (St. Martin, St. Mary and Iberia) are mandated to make up the ever-increasing shortfall.
Council members Dean LeBlanc, Chris Tauzin and Daniel Richard voted against the proposal. Richard offered a motion to proceed with the initiative without the COA component but he received no second.
LeBlanc contacted the Teche News to clarify the reasons for his opposition.
“I had no problem with rededicating a portion of the millage for maintaining our public facilities and to meet our unfunded state mandate to operate the criminal court fund. There’s definitely a funding need for those two responsibilities.
“But, I did have a problem with including the Council on Aging. It’s a great organization but they are an NGO (non-governmental organization) and not the responsibility of St. Martin Government. We have a laundry list of responsibilities and mandates that we struggle to fund. So, I don’t agree that funding should be provided to a NGO through a dedicated tax. It is my belief that removing the COA from the proposition would have enhanced the chances for approval.”

The Teche News contacted Brew for further comment on the proposal. She said the library system will be able to continue providing current services with less resources, but the effects of the reduction will be felt more in future years.
The library budget for the fiscal year ending Dec. 31 projects total revenues of $2.9 million, including $2.8 million from ad valorem taxes, $92,000 in state funding, $21,500 from services and fees, and $30,000 in interest.
Projected expenditures include $1.7 million for personnel, $566,000 for operations, $72,500 for supplies, and $76,000 for travel, or about $2.4 million in recurring expenses.
In addition, this year’s budget provides for $1.6 million in captial expenditures, mostly for the new branch library in Cecilia.
The Library Board has projected a fund balance of $9,350,000 at the end of the year.
Recent years’ budgets have provided for construction of new state-of-the-art branch libraries in Breaux Bridge and Cecilia, and another is being considered in Parks. Brew pointed out that the St. Martinville branch library, at 25 years of age, will soon be due for additional upgrades. And considerable, regular outlays are required to keep all branches up to date.
Brew’s statement to the parish council concluded:
“Both the board and our library leadership have also been open minded and available to all of our parish leaders, elected or otherwise, for any and all joint efforts to move St. Martin Parish forward and to do the best thing for taxpayer dollars. We believe we all have to do our part, especially in a time of crisis such as this pandemic. We are more than willing and prepared to do just that. However, we want to proceed as we always have, strategically and with caution.”