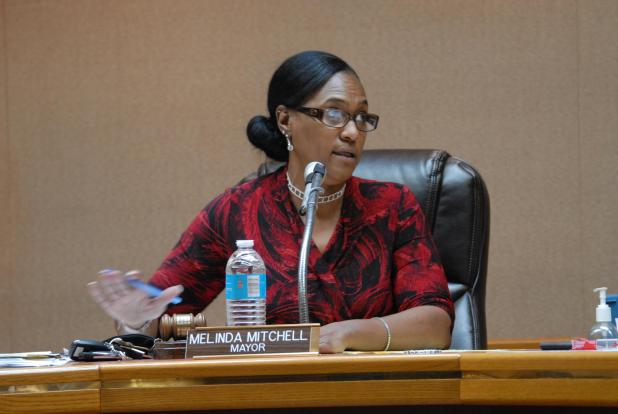 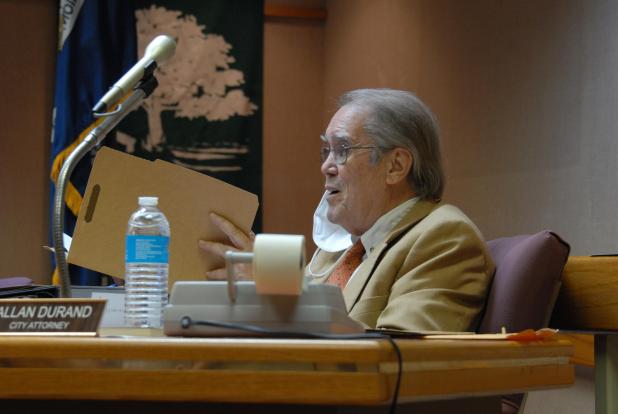 Attorney Allan Durand responded that she does not appear to have that authority. (Karl Jeter)

The St. Martinville City Council approved a charter amendment that, if ratified by the governor, will result in substantial changes in the way city officials operate.
The amendment, proposed by Councilman/Mayor Pro tem Craig Prosper at the Sept. 21 council meeting, would limit all elected municipal officials to three terms, effective with the next election cycle, and change the mayor’s office from a full-time to part-time position.
Charter changes require approval by the governor.
Mayor Melinda Mitchell said she would veto the measure, but according to city attorney Allan Durand she does not have veto authority.
Mitchell said she has the power under the Lawrason Act, since the charter is silent on the issue, but that assertion was questioned. Veto power has never been asserted by a mayor in the past.
The amendment directly challenges efforts by Mitchell and her supporters to gain more power for her office.
“This will make council elections here much more fair for the opposition,” Prosper said, “And I don’t know why we ever changed to a full-time mayor. It’s not a full-time job and we can’t afford to go on as we are.”
The pay for the part-time mayor’s position would be $30,000 per year and include a vehicle allowance.
Mitchell’s salary, as mayor, is currently $56,000.
The measure passed by a 3-2 vote, with Juma Johnson and Edmond Joseph opposed.

Property Sales
The sale of several more properties adjudicated to the city for back taxes were approved, but one part-owner, supported by Johnson and Joseph, maintained that the adjudication was improper, therefore the sales were not legal.
Rebecca Mouton said she was never properly notified of the process and, even after five years, still has the right to redeem the property for back taxes.
Durand, however, said that no such right exists after the three-year period stipulated by state law has passed and the city has no right to make a decision to the contrary.
Mouton said she has been, “treated like a dog,” when she tried to resolve the matter. Durand said she has a right to sue in District Court if she believes the process was not executed properly. “You’ll see me in court,” Mouton said. Sale of that property was approved as was a second one under dispute for similar reasons.
Durand explained that the limits were in order to prevent dishonest owners from using the process as a scam to get mortgages “wiped away” in adjudication, then reclaim the properties.

In other business:
•Action was tabled on a measure to modify the hours of operation at city hall. Suggestions include a change for the drive thru to 7:30 a.m. to 5:30 p.m. Monday through Thursday and 8 a.m. to 4:30 p.m. on Friday; lobby hours would be 8 a.m. to 4:30 p.m. Monday through Thursday and 8 to noon on Friday.
In-person meetings would be available by appointment only on Fridays.
•A part-time detective, laid off due to the COVID-19 slowdown, was rehired.
•The city will pick up the tab for the production of public records at the request of attorneys for the Evangeline Mobile Home Park.