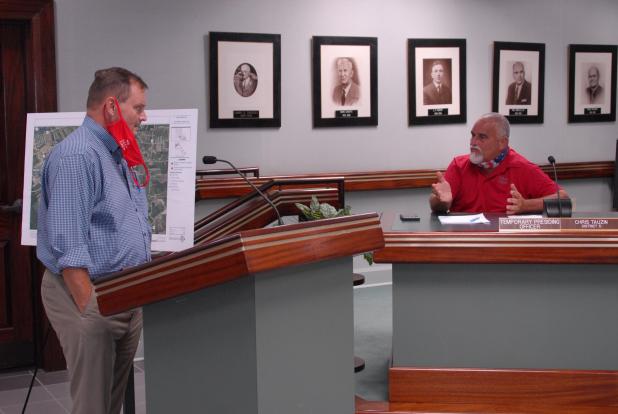 A drainage project in the western Breaux Bridge area, deemed very important in avoiding a repeat of the August 2016 flooding, is probably still about two years from becoming a reality.
At the August 18 parish council committee meetings, representatives from Quality Engineering and Surveying LLC presented an update on the now-complete engineering study. The project will be funded through a 75/25 matching grant from FEMA, and the parish has already committed a portion of the funds from the $20 million 2016 parish drainage bond to cover its 25 percent share.
Project Manager Gary O’Neal and engineer Robert Leslie reported that their study would now be submitted to FEMA for approval, then the ponderous Army Corps of Engineers permitting process can begin.
Parish President Chester Cedars expressed frustration about the fact that parish voters showed their commitment to supporting drainage improvements early in the process, “It’s now 3½ years later and not a single shovel has touched the ground yet.”
Cedars posed two questions to O’Neal: “Is this the typical pace of projects like this one, and have any other parishes been able to get work done in response to the 2016 flood?”
In response, O’Neal said, “Yes, this is the ordinary pace of any project involving the Department of Natural Resources, environmental studies, engineering studies, FEMA approval and Corps of Engineers permits.”
As to the second question, he said “To my knowledge, no other parish that has begun actual work through this FEMA program.”
In fact, O’Neal said St. Martin Parish has probably gotten further along in the process than any other parish. “You’ve showed a great deal of commitment,” he told Cedars, “and done all the right things. You’re the only parish that has actually put skin in the game. But this is the nature of the beast.”
Councilman Chris Tauzin commented that the attempt to address drainage in this area west of Breaux Bridge actually began long before 2016. “It’s ironic,” he said, “FEMA has had to bail us out again and again due to the poor drainage there.”
Leslie, expressed the frustration experienced by those who are subject to the pace of the Corps of Engineers permitting process. “If you ask, they say ‘We’ll get to it when we get to it.’ That’s never what our customers want to hear.”
Asked for his best estimate about how long the process will take before work can begin, Leslie said it will probably be two more years.

COA Support
During the Administrative/Finance Committee meeting, Council on Aging Board Chairman Burton Dupuis, accompanied by Executive Director Shanese Lewis, presented the current status of COA services and finances.
There is some disagreement about the question of the parish supporting the COA through a proposed split and rededication of a property tax millage presently dedicated to the library system. Voters will decide on the 50 percent millage split in the November election.
Council Chairman Dean LeBlanc said he does not believe it is a governmental agency and does not qualify for taxpayer funding. LeBlanc made it clear he personally supports the COA and his opinion should not be interpreted as a criticism of its operations or management, he just does not believe the proposed support of an organization listed as non-governmental is legal.
For the same reason, LeBlanc also differed with a suggestion by Dupius that the COA board should be appointed by the parish council.
Cedars disagreed, saying, “I’m not going to get into a debate about whether COA is a governmental agency or not. It performs a public function, not really different from the fire department. I see this millage rededication as a wise move, the organization serves a public purpose.”
Cedars clarified that the 50 percent split would serve other important functions as well, including financing the unfunded state mandate to support the 16th District Court.