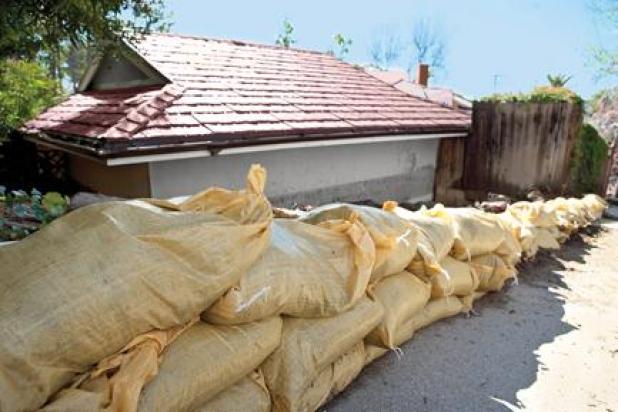 Water levels are unusually high in area waterways for this time of year, and parish officials are preparing for possible flooding conditions.
Lt. Col. Terry Guidry, St. Martin Parish director of the Office of Homeland Security and Emergency Preparedness, spoke at the Jan. 22 Parish Council meeting about measures currently being taken to prepare. Guidry said his office, President Chester Cedars and Public Works personnel are paying close attention to the rain forecasts. “We are not ringing any alarm bells,” Guidry said “But there is very little storage room in the drainage system right now.”
Levels at the Butte La Rose flood gauge on the Atchafalaya River, he said, are only inches below flood stage. Public Works personnel in lower St. Martin plugged the lowest drain at the flood-prone Bayou Estates subdivision near Stephensville last week. The move will help head off possible backflow into the neighborhood should the water rise further. In past flood events, waiting too long to do so has made it necessary to dive under the water to block off the drain.
Guidry reported that thousands of sand bags have been filled and pre-staged and more are being filled to prepare for the worst should it occur. Officials are hoping for a dry period that would allow levels to recede before the onset of spring rainfall.
Cedars said, “We want to articulate that we are approaching this methodically, not reacting in a knee-jerk fashion. We are watching the trigger points and taking steps proactively.”

Flood Wall Progress
The pending Bayou Estates flood wall is expected to reduce recurrent flooding there and in other problem areas. Cedars reported that the engineer handling the project has submitted a letter of “no objection” to the Army Corps of Engineers after minor changes to the plan were made and objecting homeowners there withdrew objections.
Corps representatives told Cedars he could expect the permit to be issued sometime this week.
Final approval from FEMA and Community Development Block Grant reviewers will then be required before the bidding process can
begin. “We aren’t there yet, but we can hear the music playing,” Cedars quipped.

GOMESA
The parish has a good chance of qualifying for funds under the 2006 Gulf of Mexico Energy Security Act, Cedars said. The act establishes a program for the distribution of a share of offshore oil proceeds to be used for coastal restoration and protection.
Cedars added that a revenue stream from the program could possibly leverage a parish bond issue. Such an issue would not carry a liability for the parish, he said, if GOMESA proceeds were subsequently withdrawn.

Other Business
The council discussed making the temporary move of the Cecilia polling place permanent. The action, to be considered at next month’s regular meeting, would allow the voting location to remain at the Cecilia Jr. High School entrance instead of returning to the old, less-convenient location in the high school gym.
Cedars reported that he has received a letter from the state treasurer indicating that the July 1, 2018 census figures indicate that the parish population is 53,253.
That is 918 below the 2017 figure of 54,171.
Finally, the council will consider moving the Tuesday, March 5 meeting to Wednesday, March 6, at 5 p.m. due to Mardi Gras.