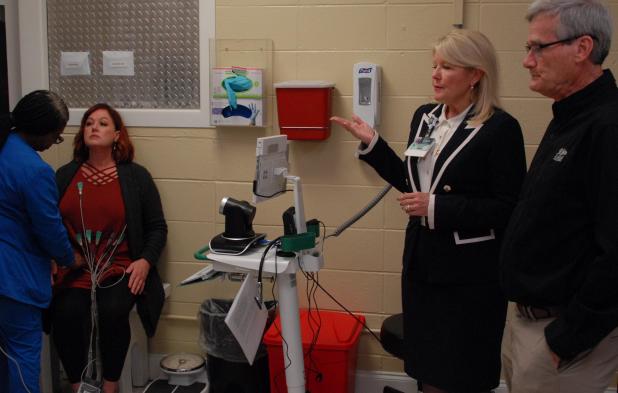 medical care at jail – A new Telemedicine system, part of an innovative contract between St. Martin Parish and St. Martin Hospital to take over medical care for inmates at the Correctional Center in St. Martinville was demonstrated for the media on Monday, Nov. 4. Here, the Correctional Center nurse conducts a demonstration as Hospital CEO Karen Wyble explains the system and procedures to Parish President Chester Cedars (right). (Karl Jeter)

Four months after a new medical care system for St. Martin Correctional Center began operation, Parish President Chester Cedars says all signs indicate the change was a good move.
At a demonstration of the new system’s Telemedicine feature Monday, Cedars said, “This is working out even better than we anticipated. We are saving the parish a lot of money and no question the level of care is better.”
State law requires parishes to provide medical care for inmates. A number of different approaches have been tried, but all were very expensive and, as Cedars said, “We do some things well, but health care is not one of them. Now it’s in the hands of professionals.”
St. Martin Hospital CEO Karen Wyble and Cedars arrived at the new solution during a conversation about how to improve medical care at the jail. When the parish council approved the deal, the hospital engaged a physician to analyze the contract’s unusual requirements and form a plan.
At the modest cost Wyble estimated at just $20,000, the needed diagnostic equipment and computer interface was added and other changes made to the existing clinic in the jail. Central to the cost-savings in the plan is the Telemedicine system.
Previously, inmates with medical complaints had to be transported by two deputies to the emergency room at the Breaux Bridge hospital. They would wait, sometimes all day, for the visit to be complete, with all the attendant security complications, a costly procedure.
With the Telemedicine system, a video consultation with a nurse practitioner can be arranged at any time without the inmate leaving the correctional facility at a cost of $35.
Integrated into the new system, Wyble explained, is mental health care, which was badly deficient due to the difficulty in finding doctors willing to work inside the facility. With Telemedicine, it can be done easily, allowing behavioral problems like addiction to be addressed on a much more effective basis.
Cedars and Wyble believe the rates of recidivism can be im-
proved markedly. Relationships of inmates with the health care system will continue after release, with transference of electronic medical records to local clinics and the issuance of a Medicaid card.
“This is a win-win-win situation.” Cedars said, “Its better for the Sheriff’’s Office, the parish, and the inmate.”