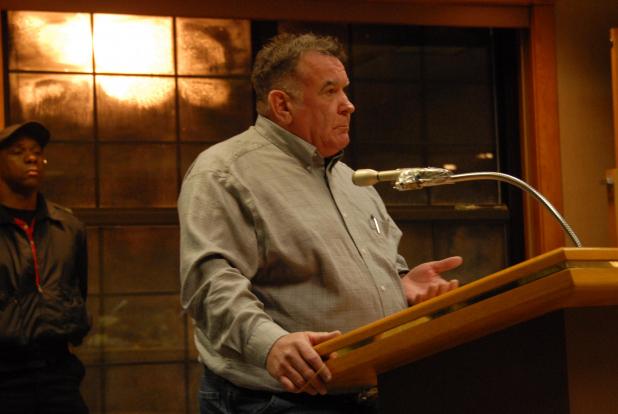 Mark Brignac, owner of the Evangeline Mobile Home Park, blames the city for insufficient electric service at the park.(Karl Jeter)

St. Martinville – If there is a single issue that has dominated recent council meetings here, it has to be the electrical problems at the Evangeline Mobile Home Park. More than half of the lengthy Nov. 18 meeting was spent debating the issue.
Park owner Mark Brignac is convinced that the city is responsible for the entire cost of upgrading the outdated electric service there. He also contends that he is the victim of a vendetta against him by Councilman Craig Prosper.
The 50-year-old park was originally configured for 60-foot trailers with gas appliances, which required only a 100-amp power supply and whose length left room for a utility easement along the northern boundary. But in recent years newer 70-foot units have been moved into the park.
Most of these homes are all-electric and require 200-amp service. And they extend into the right-of-way directly under the power lines and over water lines, in violation of building codes.
The low-power issue has been damaging appliances in the homes, and the overhead lines create a fire risk.
Brignac and some home owners have filed lawsuits and/or threatened legal action against the city, while a moratorium has blocked the movement of more trailers on the park’s north row.
The lack of right-of-way access creates numerous problems, including making it impossible to replace power poles and transformers. A plan by city electrical engineers would place new poles and lines along the central street of the park, eliminating the northern right-of-way issue and allowing a quick remedy for the problem.
Brignac would be required to pay $17,000 of the $23,380 cost.
Brignac rejects that plan, saying the poles would limit access for trailer moving and create a “spider web” of power lines at the park. But city attorney Allan Durand said he consulted a trailer mover, the “most experienced one in the area,” and was told unequivocally that it would be possible to move trailers with the poles present.
Prosper said keeping the poles on the northern boundary will require that the trailers be moved out of the right-of-way and the large trees that have since grown there be cut. Public Works Director Brian Touchet confirmed that conclusion.
But the central issue, Prosper contends, is the expenditure of taxpayer funds for infrastructure in a privately-owned, for-profit business.
“This is a business,” Prosper said, “We shouldn’t be paying one dollar. It is not the burden of St. Martinville citizens to work on private property.”
Brignac argued that the city created the problem when the council adopted a policy prohibiting trailers older than 15 years from being moved into the city.
“I’m between a rock and a hard place here,” he said. “I can’t bring in World War II-era trailers that would meet a 60-foot length, 100 amp service limit.”
He told the Teche news he has provided the needed upgrades to meter pads and weather heads and the city is responsible for its own part of the upgrade – the poles, transformers and lines.
Councilman Juma Johnson interjected that he has been working on a different solution to the problem, one that he did not want to disclose at this time. The council granted a 60-day period to allow him to explore his plan further.
“But we can’t keep kicking the can down the road on this. After 60 days we will have to take measures to protect the city from liability” Prosper warned.

In other business:
•A proposal to rename the swimming pool and soon-to-be-built splash pad the Edna Landry Swimming Complex was postponed. Councilman Edmond Joseph objected to the splash pad being built near the pool, saying it should be built at Adam Carlson Park.
•Four police officers were given promotions reflecting the results of recent civil service testing.