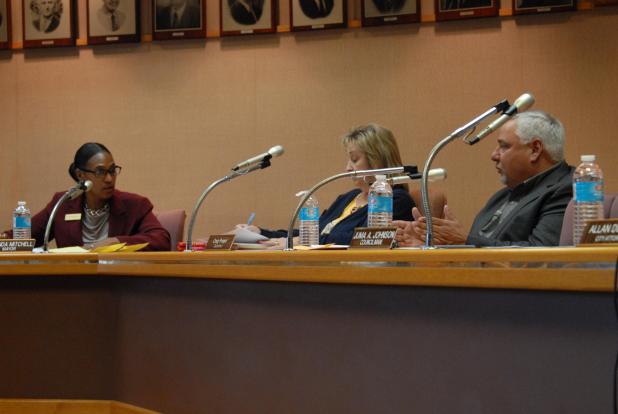 Disciplinary procedures by Mayor Melinda Mitchell against city employees must be reviewed by the council, according to city attorney Allan Durand. The issue has caused heated disagreements between Mitchell (left) and council members, including councilman Craig Prosper (right).(Karl Jeter)

The city council proceedings were a bit more orderly last Tuesday, Sept. 3, as respective duties and powers of the mayor and council were clarified by City Attorney Allan Durand.
Mayor Melinda Mitchell sought to revisit several rulings made after her failed attempt to abruptly adjourn the council’s Aug. 19 meeting. Mayor Pro Tempore Craig Prosper had continued the meeting as acting mayor after Mitchell and council members Juma Johnson and Edmond Joseph left the chambers and completed most of the remaining agenda items.
Durand explained to the mayor the city charter’s language that prevented her from revisiting the Aug. 19 items. She had sought to contest a motion to censure her for improper handling of disciplinary actions against employees and to refer questions about work done by city workers on her property to the Louisiana Board of Ethics.
Durand delivered a short course on quorum requirements, hiring and disciplinary protocols and other issues that have been the source of friction between the mayor and council in recent months.
He said the charter’s quorum requirements were satisfied at the Aug. 19 meeting, as Prosper’s role as acting mayor did not remove him as a council member with regard to quorum requirements.
Also, Durand clarified the charter’s language about the mayor’s power to issue suspensions of city employees. The charter, he said, places the power to hire, fire and discipline with the council. The mayor may take action on her own authority, but the action must be submitted to the council at its next meeting for review.
Mitchell had presented members with a highlighted page from the charter which, she said, gave her full discretion to administer disciplinary action. However, she had apparently disregarded the remainder of that same sentence, which makes it clear that she is required to submit it for council approval.
“You can’t just stop reading at the comma,” Prosper said, “you can’t just choose the parts you like.”
“That’s what y’all do,” she responded, although it was not clear what she was referring to.
Durand further clarified a section from Rob-
ert’s Rules of Order, that specifies that only a member who had voted with the prevailing side on an agenda item can initiate an action to revisit the ruling. So the mayor’s request to review the Aug. 19 motions were out of order.
Last year, the council approved a motion by Councilman Juma Johnson, who was absent from last week’s meeting, to refer to Robert’s Rules of Order whenever the charter is silent on an issue.

Berard Replacement
The council did approve a recommendation by the mayor to replace resigned Planning and Zoning administrator Shedrick Berard with current employee Danielle Fontenette. Fontenette, who already “wears many hats” at city hall, would give up some of her current duties.
The council also agreed with councilman Mike Fuselier’s request that a full job description be produced, as well as accounting of how Fontenette’s eliminated duties would be distributed to other employees.
That will be done by the next meeting and a vote on Fontenette’s new assignment will be held at that time.

Hiring Freeze?
In a related matter, councilman Edmond Joseph suggested that the city institute a freeze on hiring new city employees.
With three past months of city accounting still to be reconciled by CAO Avis Gutekunst and the consulting firm of Faulk and Winkler, Joseph suggested the city should consider a freeze until a full understanding of city finances is available.
Council members agreed, with the exception of electricians, which are badly needed.

In other business, the council:
•Approved a resolution commending Shedrick Berard for his 32 years of service to the city.
•Ordered owners of a dilapidated mobile home frame at the corner of Buchanan and Labbe Streets to clear the structure within 30 days.