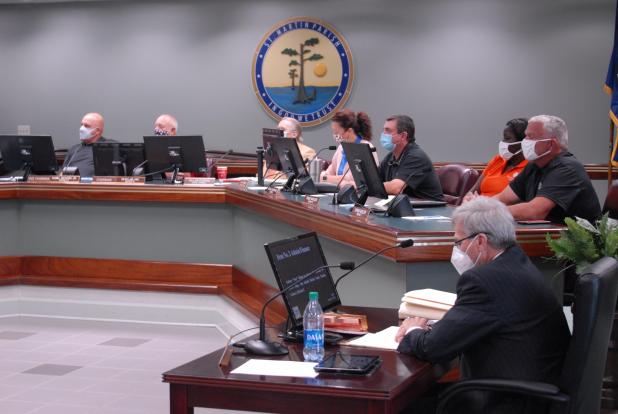 After a decade of organizing efforts, engineering studies and complicated but unsuccessful bid strategies, the St. Martin Parish Council will consider approving a revamped push to bring the Bayou Estates Floodwall Project near Stephensville to fruition.
At the Sept. 15 council meeting, Parish President Chester Cedars recommended approval of a new proposal that, if accepted, will boost the projects overall budget and increase the parish’s share of the cost by $500,000.
The project will protect the Bayou Estates subdivision and adjacent area from repeated flooding. That flooding problem has cost the parish $200,000 to $250,000 per year in pumping and manpower costs since the neighborhood was developed.
Cedars reviewed the project’s long history, explaining that objections to the plan from some homeowners and the maze of permitting requirements had been successfully negotiated. But the budgeted $4.7 million project failed to attract competitive bids. There were 16 contractors that had expressed interest, but only one actually submitted a proposal, and that was for $9.4 million.
The parish then split the project into four smaller segments to be bid separately and a second round of requests for proposals was advertised. Only three of those segments attracted bids and the combined low bids for those three totalled more than $5.7 Million. The second round of bidding was rejected.
The decision was made to discharge the original engineering firm and Sellers and Associates was retained to begin the process again.
Sellers arrived at a project cost estimate of $6.1 million, which, if the council accepts the new proposal and a contractor can be secured, raises the parish match to $1.3 million, a $500,000 increase.
As Councilman Byron Fuselier pointed out, the entire expense will pay for itself in about five years under normal circumstances. But the yearly cost can be much higher in bad years. In 2019, for instance, the cost of flood mitigation in that area was $440,000 so the break-even point could actually come much sooner.
Cedars said he strongly recommends acceptance of the new plan when it reaches the council for a vote.

Mosquito Spraying
As a result of unusually high mosquito populations, mostly detected in neighboring parishes, there was a one-time aerial application of insecticide beginning on Wednesday, Sept. 16.
Cedars reported that complaints of mosquito problems have been received by parish government and applications had been made for FEMA reimbursement. But on Saturday, Sept. 12, notice was received that the U.S. Fish and Wildlife Service had approved reimbursement.