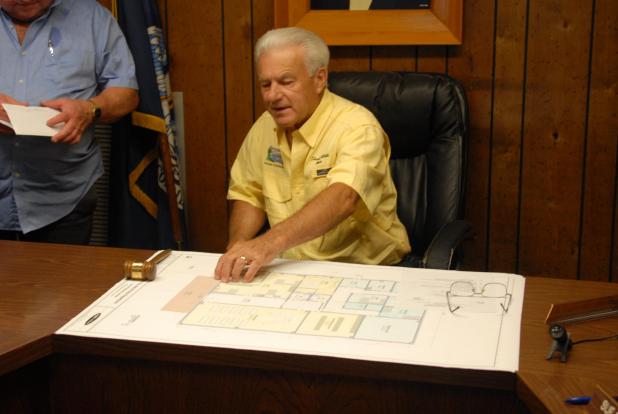 Town Hall Plans – Mayor Sherbin Collette displayed the preliminary architect’s plans for the new structure. More input from council members and residents are being gathered and more refinements to the design will be made before final acceptance. (Karl Jeter)

Concerned for the safety of Henderson residents, Police Chief Leroy Guidry is asking the town council to consider amending the existing dog control ordinance.
At the June 8 council meeting, Guidry was insistent in his belief that there will eventually be a disastrous attack if dangerous dogs are not better regulated in public areas.
Mayor Sherbin Collette recalled that last month a resident was letting his pit bull run loose in the park when it rushed a wheelchair-bound resident who was using a leaf blower. The man managed to scare the dog away with the blower, avoiding a serious incident.
Over the years, Chief Guidry said, serious injuries from dog attacks often involve pit bulls. A town ordinance requires certain steps to be taken to control dogs that have been ruled dangerous. These steps include the wearing of a muzzle when out of a confined area.
As the ordinance is presently written, it is required that each individual dog be ruled dangerous for the additional rules to be applied. But due to the physical strength of pit bulls and the strength of their bite, Guidry believes they should be presumed to meet the “dangerous” standard.
Guidry took pains to point out that he is not implying that pit bulls are more vicious, “But,” he contended, “they are so strong, and I see them being walked by people who I know could not hold them back if they were determined to break away and attack someone.”
“Even if the owner is present, by the time they get them under control,” he continued, “it could be too late. The wearing of a muzzle is not abusive to the dog, but would basically eliminate the fear that a child or anybody else could be mauled or killed in their own yard.”
Council member Jody Meche owns a pit bull, but he did not disagree with the chief. “They are more dangerous than other dogs. Mine is a very nice dog, but he is solid muscle. I think this would be a reasonable step to take for the good of the people of Henderson,” he commented.
Attorney Jerry Mallet said he does not believe a well-raised pit bull is more dangerous than other breeds, but Guidry strenuously disagreed. “This will not be popular with everybody, but it’s worth the fight,” he concluded.
The non-profit organization DogsBite.org publishes records of reported dog bite incidents across the country. According to their data, in the 14-year period of 2005 through 2018, dogs killed 471 Americans. Pit bulls or pit bull mixes contributed to 66% (311) of these deaths.
The statistics for 2019 show 48 fatal attacks in the united states for which breed information is available. Of those, 32 were attributed to pit bulls or pit bull mixes. Statistics show them to be one of the top five breeds in popularity in the U.S., but that varies widely by state.
St. Martinville has an ordinance that assumes pit bulls to be dangerous and requires their owners to take special measures, as does St. Martin Parish for unincorporated areas. The Breaux Bridge ordinance does the same, but it applies to five specific breeds including pit bulls.

In other business:
•Collette showed the council a preliminary drawing from architect Glenn Angelle for the new city hall building now in the planning stage. The new structure, to be located on Main Street, will be slightly larger than the existing town hall, and will be a much better organized and more attractive space for the benefit of both employees and residents.
•Council member Wil White suggested that, with the financial strain on many needy residents due to COVID-19 restrictions, the town should consider making a donation to the Council on Aging’s Meals on Wheels program. No action was taken at this time.