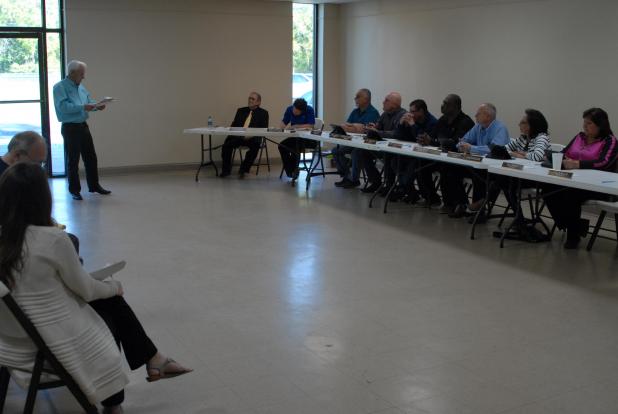 Parish President Chester Cedars says a possible new avenue for funding repairs to the collapsed Henderson Levee Road is under consideration.
At the March 19 Public Works Committee meeting, held in the Henderson Recreation Center, Cedars said he just learned about the FEMA non-emergency project funding program at a Jan. 9 meeting. State legislators Fred Mills and Mike Huval, Henderson Mayor Sherbin Collette, Department of Transportation and Development (DOTD) representatives and others were present at that meeting.
Reviewing the developing history of attempts to get the road repaired, Cedars said it was the third high-level meeting held in the effort to find a solution to the road failure. The 2016 collapse has resulted in restriction of the road to a single lane for the past 2½ years.
The road failure was followed by a protracted period of finger-pointing about who is responsible for the repairs and an eventual acceptance by the DOTD in July of 2018 that it is indeed the state’s problem to solve. That admission did not result in state funding becoming available, however.
The root cause of the problem, Cedars reported, is thought be an insufficient 3-to-1 slope on that area of the levee’s western side, rather than the 4-to-1 slope required for long-term stability.
A number of smaller slides have also occurred recently at other places along the Levee Road, Collette told the council, the largest being near Lake Dauterive.

High Water
Cedars also reviewed the present high-water situation in the Stephensville/Belle River area. He reported that 49,000 sandbags have been distributed so far and this time none had to be filled by residents.
Drive-through distribution has been halted, he said, but residents who feel they need more may bring shovels to the Stephensville park and fill additional bags. The bag-filling machine has been returned to St. Martinville for maintenance.
Cedars said the risk of flooding from this particular event has decreased in the past week, but that bags should probably be left in place, as the threat of high water will continue through April.
“This is a marathon, not a sprint,” he said.

Safe Room
An intergovernmental agreement will be considered, allowing the use of space in the Stephensville Park for the construction of an emergency-preparedness “safe room” or command center. Similar to the one recently completed at the Public Safety Complex near Ruth, it would provide a secure place for essential command personnel stationed in the lower part of the parish in the event of a hurricane or other disaster.