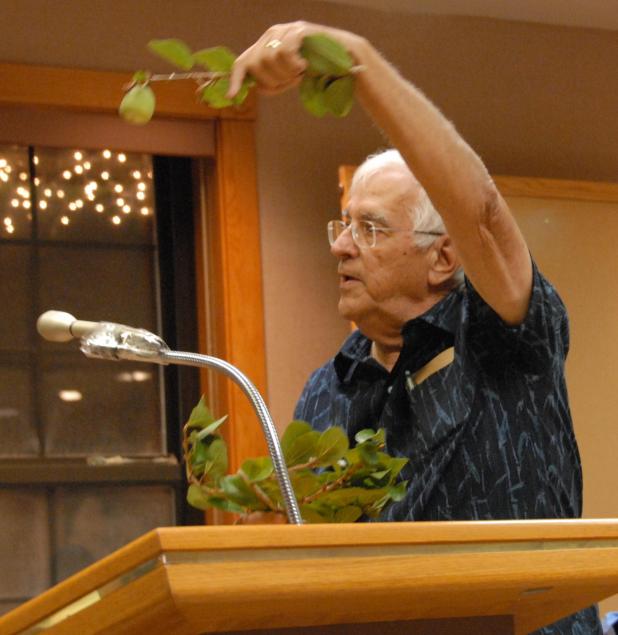 Vine troubles – Arborist Jim Foret displays a piece of the fig vine that has grown into the canopy of the Evangeline Oak. Foret and LSU Ag Center Extension agent Stuart Gauthier reported on their inspection and recommendations for preservation of the city’s trademark tree.(Karl Jeter)

Evangeline Oak being ‘strangled’ by vines

LSU Ag Extension Agent Stuart Gauthier and Lafayette arborist Jim Foret told city officials Monday that all is not as it appears when looking at the Evangeline Oak. It turns out that much of the green growth in the canopy of the city’s legendary live oak tree is actually made up of fig vines.
Foret said he found a report written about the oak by his arborist father back in 1992 with the same conclusions: The 12 to 15 large fig ivy, or fig vines, have grown out of control and are now competing with the tree for both water and light and placing extra weight on the massive limbs.
Foret brought sprigs from both the tree and the vine to show the council. The vines’ leaves have a shape and color deceptively similar to the tree’s own greenery, so the actual volume of growth is not easy to spot in the canopy.
The oak, he added, is in its “old age,” about 150 to 200 years, but not in bad shape. “It will rebound if we treat it right. That oak will probably outlive all of us, even the young people in the back of the room. But it’s old and needs all the energy it can get,” Foret joked, “like me.”
The tree should not be fertilized or watered and no chemicals should ever be used on it, he advised. The offending vines should be cut at the ground and allowed to die. Removing them after they have dried up is optional.
Gauthier added that the vines are also spreading to some of the large cypress trees along the Bayou Teche, so it’s time for a serious round of “seek and destroy” in that area with regard to fig vines.
Gauthier also said it would be a good idea to remove some of the dead growth from the oak and to trim another nearby oak. That would allow the second tree to grow more vertically rather than spreading out and competing with the Evangeline Oak for space.

Dilapidated Properties
Zoning Enforcement Director Danielle Fontenette reported on three distressed properties she is working to remedy.
One, on Pinaud Street, is being re-levelled, painted and repaired by a new tenant. The council gave the owner 30 days, after which the progress will be reviewed and a decision made as to further action.
A similar decision was made regarding a property on Cemetery Street where some progress at cleaning up has been made by the owner.
The council directed inspector Rodney “Cooney” Richard to check a structure on North Main Street at Conde Road to determine whether it should be condemned.
Fontenette also proposed raising the charge billed to owners when the city steps in to maintain private properties.
The current charge is $100 per acre when a city crew and equipment cleans a site. At Fontenette’s recommendation, the council increased the fee to $175 per hour.
Although the council first proposed a minimum one hour charge, at the urging of Mayor Melinda Mitchell members agreed to pro-rate the $175 charge based on the actual time spent on the property by the crew.

In other business, the council authorized Police Chief Ricky Martin to hire replacements for three full-time and one part-time dispatcher.
Members also agreed to change the status of two temporary docents at the city museums to permanent, but part-time, employees.