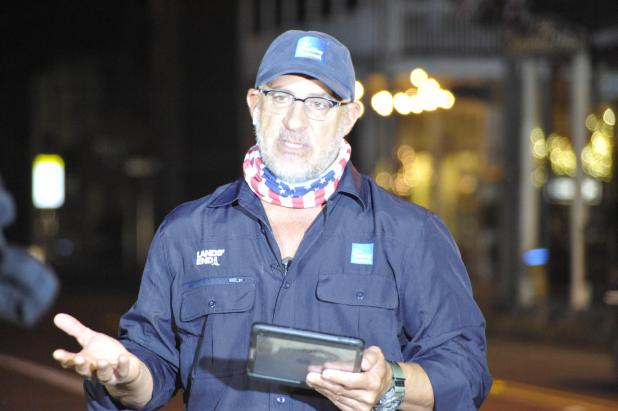 JIM CANTORE and his crew from the Weather Channel were broadcasting live from downtown Breaux Bridge as Hurricane Delta stormed into Louisiana. (Sally Angelle)

Just as it did six weeks ago with Hurricane Laura, St. Martin Parish escaped major damage when Hurricane Delta roared into Louisiana as darkness fell last Friday, Oct. 9.
The eye of the storm hit almost exactly where Laura did, near the Cameron Parish community of Creole, about 70 miles west of St. Martinville.
Delta caused widespread power outages across the parish and SLEMCO’s Mary Laurent said the utility company still had approximately 20,700 customers in its territory, including 1,600 in St. Martin Parish, without power as of noon Tuesday.

Classes resumed at parish schools on Tuesday and Superintendent Allen Blanchard reports only minor problems with the exception of the Cecilia baseball field and St. Martinville softball field where some features were badly damaged.
Office of Homeland Security and Emergency Preparedness Director Col. Terry Guidry reported that, while the parish fared pretty well, damages are far more extensive than were sustained during Hurricane Laura.
“We’re pretty sure we will meet the threshold for assistance,” he said, “But the reported damages we record will affect the category of assistance we will qualify for.”
Residents or business owners with damage, major or minor, are urged to contact the St. Martin OHSEP office at 394-2808 or by email at ohsep@stmartinsheriff.org.

Sugarcane
Cane farmers are cautiously optimistic that damage to the 2020 cane crop may have been much less severe than feared.
LSU AG Agent Stuart Gauthier told the Teche News that, ironically, the fact that the cane already had to stand itself back up after Hurricane Laura worked to the crop’s advantage. The September passage of Laura probably toughened the stalks and prepared them well for Delta’s winds from the same general direction.
Gauthier added that little breakage, twisting or matting of the cane has been seen and farmers have been breathing a sigh of relief over the limited damage.
Most areas got no more than 3 to 3½ inches of rain, so there have been minimal delays in getting the harvesting equipment back into the fields.
LaSuCa St. John mill spokesman John Hebert said some additional fraying of the tops has occurred, but the crop seems to have weathered pretty well. Where ripening agent has been sprayed on the crop, Hebert said, the time delay has allowed it to take effect.
He added that the three-day shut down of the mill adds expense to the operation and will likely extend the grinding season four to five days.
“That causes some added worries about freezing and other problems,” Hebert commented.
With about 16 percent of the harvest complete, both Gauthier and Hebert said the crop is shaping up to be a good one, with tonnage and yield quite good. “Not in record territory,” Hebert said, “but it’s yielding above average.”
Gauthier added that other crops also stood the stress well. “There is still some soybeans left in the fields, but it did well in the storm. And a majority of the rice was already harvested.”