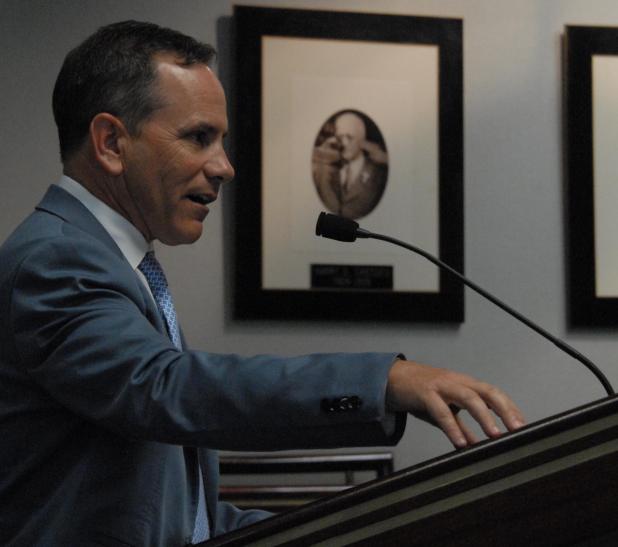 Former Parish President Guy Cormier told the parish council last week that, as the end of the 2019 legislative session approached, the outcome of the session is generally good.
Of the 272 bills considered this session, four had a particular impact on St. Martin Parish. Two of those would have diminished parish government authority, but were narrowly defeated, he said.
Cormier, who resigned as president in 2018 to head the Louisiana Police Jury Association, presented a report at the June 4 council meeting. He said that two items that would have had a particular impact on parish government failed to pass.
An effort to create a central state-level authority for sales tax collection and another to remove parish discretion in granting property tax waivers under the Industrial Tax Exemption Program (ITEP) were both voted down but will probably appear again next session, Cormier said.
He commended President Chester Cedars’ work in establishing a comprehensive set of guidelines for granting ITEP waivers and said other parishes as well as state tax authorities are considering adoption of the standards to bring consistency to the program.
Parish control of the waivers was only granted last year and no state taxes are involved, so it is not clear why state legislators were seeking the change. The parish approved an 80 percent, ten-year ad valorem tax waiver to Peppers Unlimited Inc. under the ITEP program.

Jail Medical Care
A proposal to enter into a contract with St. Martin Hospital to administer health care services at the St. Martin Correctional Center was approved. Cedars said he is “very excited” about the plan, which could save the parish $200,000 or more per year while providing improved care for the inmates.
Under what is thought to be the first such agreement in the state, the hospital will institute a telemedicine program, electronic medical record-keeping, therapy for behavioral issues such as drug addiction, and post-release counseling.
Cedars had commented at the last meeting that parish government is good at some things, but administering health care is not one of them. He took pains to clarify that he was not implying that medical personnel at the jail do less than an excellent job. “These people are great. I was just saying that we in parish government are not physicians or medical administrators.”

GOMESA Bond
The council approved an ordinance to proceed with an application for a $10,250,000 bond secured by Gulf of Mexico Energy Security Act (GOMESA) proceeds. If the project is approved as an acceptable use of GOMESA funds as Cedars expects, the bond will finance a permanent replacement for the Butte LaRose pontoon bridge.

Cade Park
The low bidder, J.C. Construction, was selected for the next phase of improvements at the Cade Park. Included in the $1,776,000 contract is the construction of a second concession stand, a basketball court and an additional asphalt parking lot, along with other improvements.

Bamboo Control
An ordinance declaring bamboo a nuisance was passed. The action does not limit the planting of bamboo by residents, but requires them to maintain it if they do and prevent uncontrolled spreading.