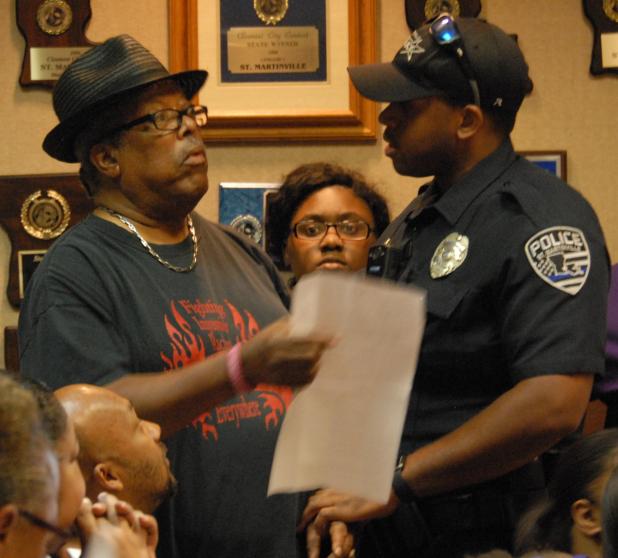 Before an overfilled City Hall meeting room, a year of mishaps, criticism and toxic relationships came to a head here Monday evening.
Even though the city is phasing in stricter rules of conduct for council proceedings, the first June meeting descended into what was mostly an unpleasant 3½-hour spectacle. Over the course of the meeting, several residents were ejected by police for violating new policies against arguing with or shouting at council members.
Early in the meeting, there was a discussion about electrical service upgrades at the Evangeline Mobile Home Park. Owner Mark Brignac has maintained that the city is responsible for upgrading the 100-amp service to 200 amps in part of the park. He submitted bills to the city for electrical engineering services as well as legal fees he has incurred. Under the advice of attorney Allan Durand, the council refused to make those payments.
Besides insufficient amperage, the placement of longer trailers that extend into the utility right-of-way, under the power lines and on top of water lines has become an issue. The power line is strung from poles that are rotten, and with hurricane season approaching, that creates an unacceptable liability for the city, Durand said.
It was suggested that the line could be moved from the right-of-way to run along the center drive of the park. Or, the five long trailers could be moved closer to the road and out of the right of way. Councilman Craig Prosper said trees would have to be cut and portable buildings moved, but it would eliminate the code violations and provide access for maintenance.
The council approved a motion giving Brignac 30 days to develop a plan, after which the power to the offending trailers could be cut off.
It was during that discussion that Nary Smith, a former assistant police chief and unsuccessful council candidate, became argumentative and was the first to be ejected from the meeting.
Later, an agenda item requiring a new, more detailed form to be filled out in order to address the council was tabled to allow changes to be made. Durand had prepared a sample form based on those used in Lafayette and other area cities. Residents will be required to keep to the subject, state their case without argument and will be limited to three minutes.
Then the discussion turned to an item by Prosper about a permit issued by Building and Zoning Director Shedrick Berard. Prosper said a structure had been permitted that is not in compliance with the rules of the neighborhood homeowners association.
Berard responded that the city does not enforce specific neighborhood rules. Durand suggested that the homeowners association should be notified when an out-of-compliance permit has been applied for.
And Berard, referring to his stressful tenure as chief administrative officer, said that he believes he was treated unfairly by some members of the council.
He said to Prosper, “You told people not to help me. You wanted me to fail and I failed. Congratulations.”
He continued to make the point that his transition into the CAO position would probably have had a better chance of success but for the unfortunately timed extended medical absence of the experienced payroll clerk.
Later, he was again in the hot seat when Prosper criticized him for taking too long to file an insurance claim following an accident in February that took out two utility poles on Main Street and caused an extended power outage.
That led to a delay in paying Lafayette Utility System (LUS) for its assistance. Due to that failure to pay, LUS refused to assist St. Martinville last month when seven utility poles
were broken in a severe thunderstorm.

Robert’s Rules The council approved the adoption of Robert’s Rules of Order for the conduct of future council meetings. Durand recommended the action, saying that the comprehensive set of rules would provide a foundation for a stricter enforcement program the council has approved.