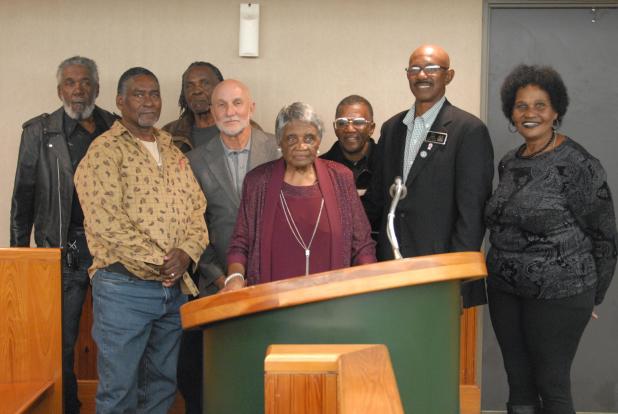 103 and doing fine – Breaux Bridge Mayor Ricky Calais and council members gave special recognition to 103-year-old resident Mrs. Rachel D. Anderson Clipps (center) during their Nov. 12 meeting. Family members say she is very sharp and takes care of herself. Mrs. Clipps is shown here with some of her children, grandchildren and friends.(Karl Jeter)

Auditor Russell Champagne has delivered the city an “unmodified” or clean audit report for the 2018/2019 fiscal year.
At the Nov. 12 council meeting, Mayor Ricky Calais and council members were briefed on the report’s positive findings for the fiscal year that ended June 30.
Champagne described the city’s financial position as sound.
Cash reserves were somewhat reduced, but that was offset by an increase in the value of fixed public assets, reflecting the fact that city funds have been spent on needed infrastructure projects.
“The net position went down,” he said, “but the city has a lot to show for it. The purpose of municipal government is not to store cash, but to do the work needed to keep the city working properly and that is what has been done here.”
Champagne added that there was an operating loss of about $39,000 in the utility enterprise fund, which is not uncomfortably far from a
“break even” situation. It is a situation that “needs to be watched,” he said, but does not constitute a real problem.
Enterprise fund operations are required to operate without losses in the long term, but fluctuations within a fairly narrow range can be expected and are by no means unusual, he commented.

Retirement City
The council appointed three residents to a newly-formed Retirement Community Oversight Board. The state ’s recent nomination of Breaux Bridge for “retirement community” status for 2020 requires the board’s formation.
Municipalities selected for this certification can benefit from state-level marketing efforts, networking opportunities, and potentially, grant funding.
In other business, the council awarded a contract for a major sewer extension north of I-10 to M.P. Dumesnil Construction L.L.C. of Sunset.
The $4.19 million contract involves the installation of 8.5 miles of pipe and should begin in the next few weeks, Calais said.

Resident Honored
Councilman E.J. Ledet introduced a resident in his district, Mrs. Rachel D. Anderson Clipps,who recently reached the age of 103.
The clear speaking centenarian briefly described the early 20th century Breaux Bridge she remembers very well, a city with more horses than motor vehicles on its streets. Her relatives said she still is very capable and always thoughtful of others.