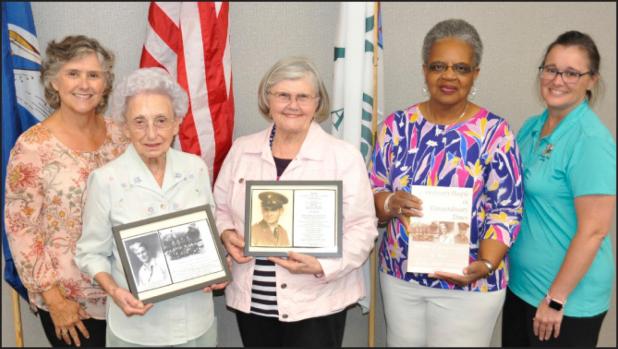 DOLORES H. MILLS (center) holds a photo of her first cousin, Alex Savoie, while Charlar Brew (2nd from right) displays the book “Ordinary People in Extraordinary Times, Stories of Americans at War in the 20th Century,” documenting the stories of Fred E. Cormier and Savoie that was donated by Mills to the Cecilia library. Cormier’s daughter, Yvonne Cameron (from left) and widow, Alice, holding a photo tribute to husband Fred, attended the presentation to the library along with Cecilia branch manager Rachel Dugan.(Sally Angelle)

Many men who fought in World War II returned home and never spoke about their experiences serving their country during war time. In 2001, as part of a writing class assignment, former educator Dolores Hernandez Mills interviewed Cecilia native TSGT. Fred E. Cormier, flight engineer/gunner in the U.S. Army Air Force’s 459th Bomb Group (B-24 Liberators), about his experiences as an airman and prisoner of war.
The story, titled “One Man’s Story,” was the first time Cormier spoke of his World War II experiences and is published in the book “Ordinary People in Extraordinary Times, Stories of Americans at War in the 20th Century.”
Cormier volunteered for the USAAF in November 1942 and underwent months of training at bases in Mississippi, Michigan, Utah, Texas, Arizona and Massachusetts before being assigned to the 459th in January 1944.
The group’s 40 B-24s left their base on Long Island, following a circuitous route that included stops in Florida, Trinidad, Brazil, Africa, Morocco, Tunisia and finally Guilia Field Base in Cerignola, Italy.
From February through June 1944 Cormier’s unit flew combat bombing missions against targets in France, Germany, Austria, Romania and northern Italy.
On his 50th – and what would have normally been his last – mission his plane was hit by antiaircraft fire. Crew members were forced to bail out and were taken prisoner by German soldiers.
Cormier was a POW from July 2, 1944, until being liberated by British troops on May 2, 1945, in northern Germany.
He finally returned to Cecilia after being discharged in October 1945.
Cormier died in March 2013 at the age of 89.

Mills recently donated a copy of the book to the Cecilia branch of the St. Martin Library.
The book also includes a tribute to Mills’ first cousin, Alex Savoie, who served in the U.S. Army Air Force as a technician 5th grade. He was also a POW who died while serving his country and is buried in a military cemetery in Manila, Philippine Islands.
Visit the Cecilia library to view the display and read the story.