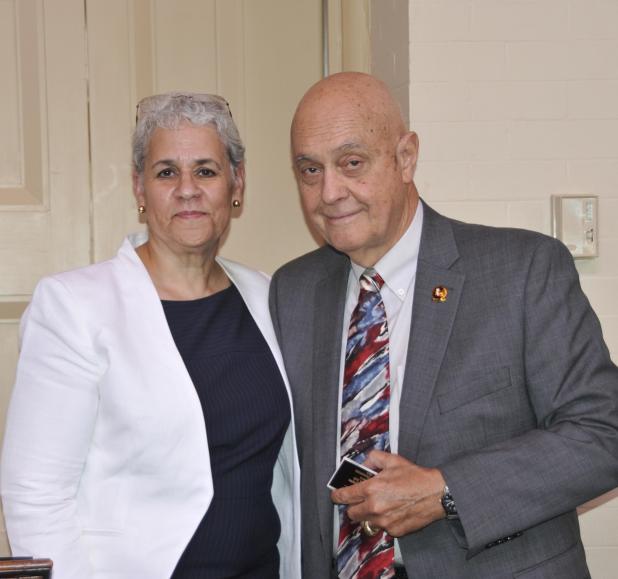 Louisiana Press Association (LPA) members and guests packed the room at the Baton Rouge City Club April 23, at the association’s Stockholders Luncheon.
Governor John Bell Edwards was the keynote speaker.
LPA President Renette Dejoie-Hall, publisher of the Louisiana Weekly, inducted Teche News Publisher/Editor Emeritus Henri C. Bienvenu into the LPA 50-Year Club.
The club recognizes persons with ties to Louisiana newspapers or news websites who have 50 years or more cumulative years of affiliation in some capacity with newspapers.
The Louisiana State Newspapers group submitted the nomination for Bienvenu, who in March celebrated 53 years of work for the Teche News in St. Martinville.
He joined the paper officially in April 1966, after 32 months active duty including 22 months assigned to the XVIII Airborne Corps Artillery at Fort Bragg, N.C. He spent two years in the Army Reserves as commanding officer of a combat engineer company in Lafayette and separated from service with the rank of captain.
He “retired” in 2007, but is still working as the Teche News editor/publisher emeritus., continuing to write a column, Pense Donc, which he started in January 1976.
That’s more than 2,000 columns he’s written, plus countless news articles, headlines, cutlines, and obits.
Henri can add still more years of affiliation to the newspaper business to the 53 already mentioned, as he was literally born into the newspaper business and specifically born into The Teche News.
Henri’s father, Marcel “Blackie” Bienvenu, in 1935 took over the newspaper Henri’s grandfather, Laizaire, helped found in St. Martinville, called The Messenger – which became the Teche News in 1948.
Henri earned a B.S. degree in Business Administration from the University of Southwestern Louisiana (now UL-Lafayette) in 1963 where he was a member of the College of Commerce Honor Society and Phi Kappa Theta Fraternity.
But he had also had extensive on-the-job experience working a variety of jobs as a teenager, working in the production area of Teche News, melting lead for the Linotype and running sheetfed 2-page Lee and 4-page Babcock letterpresses.
In addition to following his grandfather and father into the newspaper business – Henri’s uncle, his dad’s brother, Ralph, was a long-time publisher of the Abbeville Meridional.
Henri has covered more than 45 Breaux Bridge Crawfish Festivals for the Teche News.
He served as president of the LPA in 1979-80.
Henri is married to the former Maria L. Comeaux of Lafayette, a retired teacher. They have four daughters and one son, and 18 grandchildren.
In addition to giving some history of LPA and mentioning some of the association’s recent accomplishments, Hall announced the new officers and board that were confirmed at the Stockholders Meeting prior to the luncheon.
Teche News Publisher Mary L Terry will continue to serve on the board of directors.
Following the luncheon, a number of newspaper representatives met at the capitol just ahead of the day’s convening of a session to meet with their local legislators to show their support for LPA’s and the industry’s interests in a number of bills being considered.