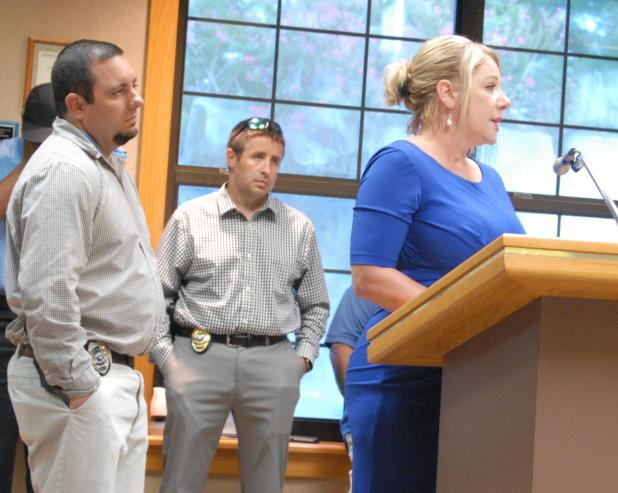 Suit on hold – Fraternal Order of Police legal representative Rebecca Borel discussed pending legal action against the city on behalf of several officers who say they were unfairly maligned by Shedrick Berard, who allegedly accused them during the June 5 council meeting of lying on an accident report. (Karl Jeter)

The city’s amended budget for fiscal year 2018-2019 was presented by auditor Burton Kolder and tentatively accepted by the city council at a June 24 meeting.
The budget shows an operating surplus of $56,000 on total income of $10,096,790 with expenses of $10,958,963, leaving an operating deficit of $856,000.
But the deficit was reconciled with capital lease and depreciation offsets resulting in the small surplus.
A three percent raise for all city employees included in the proposed budget was put on hold. Council members Mike Fuselier and Craig Prosper suggested the delay to allow consulting firm Faulk and Winkler and new Chief Administrative Officer Avis Gutekunst tine to make more progress reconciling city accounts.
The city books were left in disarray following the brief term of Shedrick Berard as CAO and the extended absence of the payroll clerk. A number of accounting missteps resulted in bounced checks and unpaid invoices and some associated costs not yet known.
Council members will revisit the question of the raises when accounts are in order and the city’s actual position is clear. Accounts have only been reconciled through February so far.
Raises for the police were included in the budget as the cost is supported by increased ticket and fine revenues.

Police Suit on Hold
Further legal action on a complaint filed against the city by several police officers has been delayed pending a review of video of the June 5 council meeting.
Rebecca Borel, legal council for the local chapter of the Fraternal Order of Police, agreed to delay further action on the complaint alleging that Building and Zoning Director Shedrick Berard made false statements that officers lied on an accident report.
The report in question concerned an accident on Main Street in February that toppled two utility poles and left much of the downtown area without power for several hours. Berard allegedly made the statement while defending himself from criticism over a four-month delay in filing an insurance claim for the damage.
Berard was offered
the chance to satisfy the complaint by retracting his statement, but he declined. Borel, Berard, Mayor Melinda Mitchell and City Attorney Allan Durand will meet and review the video of the meeting and a decision will be made on the issue at that time.

Mobile Home Park
In other business, Mark Brignac addressed the council again in a further attempt to get the city to upgrade electric service to his mobile home park. The council agreed to study the cost of moving several trailers that were placed in the utility right of way and possibly consider a cost-sharing arrangement.
Brignac was given the option of moving the service line to run along a central road in the park instead of along the north property line. But he rejected the proposal saying it would be unsightly and make moving trailers difficult.
Trailers longer than the park was designed for extend into the right-of-way. Brignac holds the city responsible for permitting them and allowing connection of the electric service.

$419 Bill
Finally, the council returned to the issue of a voluminous public records request by accountant Janine Coleman. The city printed 839 pages for Coleman and so far she has not been billed for the service. Gutekunst told the council a bill in the amount of $419.50 will be sent to her soon.