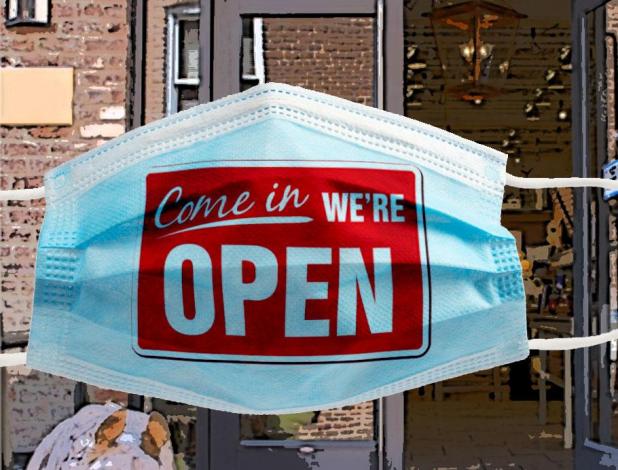 "After discussing the data with experts at the Louisiana Department of Health and epidemiologists and the Resilient Louisiana Commission, we will be moving to Phase One [partial reopening] on Friday, May 15, so we will be lifting the stay at home order." And with that announcement by Governor John Bel Edwards, thousands of Louisianans breathed a sigh of relief with the hope of getting back on their feet financially.

This Friday, most businesses can reopen with certain restrictions as found on the state website, https://opensafely.la.gov/. So far, over 9,000 Louisiana businesses have enrolled on the site. Most state office buildings in Baton Rouge will reopen Friday while providing masks to employees and the public. Many state employees will continue to be allowed to work from home. Motor vehicles and driver's license offices will reopen Monday.

Using CDC guidelines, the state is asking employees and patrons to wear masks, keep six feet apart, and still stay at home if possible. A vaccine is not expected for another year.

But the next day after Governor Edwards announced Louisiana's Phase One move back toward normalcy, the nation's undisputed leader in the fight against Coronavirus, Dr. Anthony Fauci, was telling U.S. senators just the opposite. In his first appearance on Capitol Hill, albeit via computer, Fauci gave lawmakers a dire warning about reopening too soon.

"I've expressed then and again," said Dr. Fauci, "that it is my concern that if some areas, cities, states, what have you jump over those various checkpoints and prematurely open up without having the capability of being able to respond effectively and efficiently, my concern is that we will start seeing little spikes that might turn into outbreaks."

Also joining via video streaming, the director of the Centers for Disease Control, Dr. Robert Redfield, agreed with Fauci.

"It's important to emphasize, we are not out of the woods yet," Redfield said. "We need to remain vigilant with social distancing."

At least one senator, Republican Kentucky Senator Dr. Rand Paul, a physician himself, did not agree with either Fauci or Redfield. In March, Paul became the first lawmaker on Capitol Hill to test positive for the Coronavirus. He called out Dr. Fauci.

New evidence of increasing cases nationwide seems to bear out Fauci's warning. After eight weeks of lockdown, fear, and frustration, many say the test has finally come down as to who is right about how far and how fast to reopen.

According to data collated by The New York Times and others, in Santa Barbara, California, cases are doubling every four days. In St. Cloud, Minnesota, every seven days. In Omaha, Minneapolis, Lumberton (North Carolina), and Dayton (Ohio), every nine days. Dallas is seeing a 117-percent jump. By comparison, cases in historic COVID hotspots such as New York and Louisiana have begun easing.

Monday, Colorado officials shut down C&C Café in Castle Rock after the owners defied state orders and opened for Mother's Day. People jammed in to the restaurant without wearing masks or practicing social distancing. The crowd was photographed and posted to social media, which tipped off authorities.

Governor Edwards is reluctant to take similar extreme measures but has authorized State Fire Marshal Butch Browning to advise businesses on how to reopen. The State Fire Marshal already authorizes seating and crowd capacity in public places. In the current pandemic, Browning has the power to enforce state orders.

Governor Edwards says he and Dr. Alex Billioux, assistant secretary of the Louisiana Department of Health, are also closely watching the Monroe area where cases and hospitalizations are going up while cases in the remainder of the state appear to be waning.

"We have particular interest," said Governor Edwards, "in monitoring the I-20 corridor between Shreveport/Bossier and Monroe in Regions 7 and 8. I think Dr. Billioux mentioned our testing efforts across that I-20 corridor so we can monitor it very closely along with our contact tracing efforts."

The governor says he believes Louisianans will continue to comply by wearing masks, keeping safe distances and showing the rest of the nation that Louisiana will be among the first to safely reopen for business, especially for conventions and tourism.